We noticed that you are using a browser that is no longer supported by our system, to enjoy the full Volvo experience consider changing browser
x
×

2020-12-08
Martin Tomlinson
Asda is taking delivery of 202 Volvo FH LNG tractor units in the run-up to Christmas peak trading, in what is believed to be the single largest order ever placed in the UK for heavy trucks running on renewable fuels.

The supermarket has ambitions to transition its core fleet of 1,000 tractor units from diesel to gas by 2024, after in-house trials showed running on biomethane reduced CO2 emissions by more than 80 per cent. The delivery also sees Volvo’s share of Asda’s fleet more than double in size to one third.

Sean Clifton, Senior Manager - National Fleets, says: “At Asda we like to think big, start small and scale fast – and that’s precisely what we’ve accomplished with this move to biomethane.

“We began with a pair of Volvo FH LNG trial vehicles at our Avonmouth depot in December 2018, which quickly proved to be very capable. A further 49 joined between December 2019 and May 2020; and now this latest order sees an additional 202 Volvos being deployed across five additional sites in our network.”

Supplied by Andrew Low, National Key Account Manager at Volvo Trucks UK & Ireland, the order comprises 29 4x2s for operation with single-deck trailers, and 173 6x2s which will pull double-decks. All trucks benefit from sleeper cabs and a comprehensive specification fine-tuned for safety, sustainability and efficiency.

The bulk of the new trucks will remain in service until January 2026 – 12 months longer than Asda’s typical replacement cycle for diesel vehicles.

Clifton explains: “The higher capital price for gas trucks means it makes sense to run them longer. But having put the Volvos through their paces for two years, we have absolute faith in their ability to go the distance – even in our 24/7 operation, where trucks rarely stop.”

Sharing more details about the successful trial phase, he adds: “Our drivers in Avonmouth have really supported the transition. They love the Volvos and have found that running on gas is smoother and quieter than diesel, and there’s none of the range anxiety you can get with some of the other current alternative fuel options.”

The longest run covered by Asda’s 4x2s is a return trip of 380 miles, which is comfortably achieved with a quarter tank of biomethane remaining. At 44-tonnes, the 6x2s with double-deck trailers are covering up to 350 miles between refills, which fits Asda’s route network perfectly. Refuelling is provided by Air Liquide and Gasrec, via a mix of on-site and open-access facilities.

The FH LNGs each benefit from Volvo’s unique approach to gas engine technology, using small amounts of diesel to initiate ignition of the air-fuel mixture. This enables the Volvo G13C engine to deliver the same 460 hp and 2,300 Nm of torque as its diesel-only counterpart, with matching driveability, reliability and service intervals. Plus, Volvo’s gas powertrain provides engine braking just like a regular diesel – and without requiring a separate retarder which adds weight and complexity.

They have been supplied on Volvo Gold Contracts, which provide a 100 per cent uptime promise and will see all maintenance completed within the dealer network. PDIs were completed jointly by Volvo Truck and Bus Centre Wellingborough and Truck and Bus Wales and West in Avonmouth. 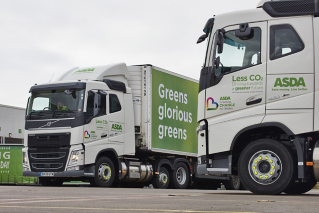 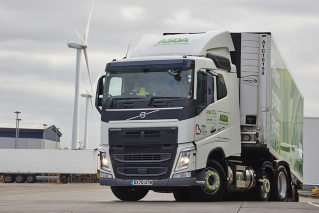 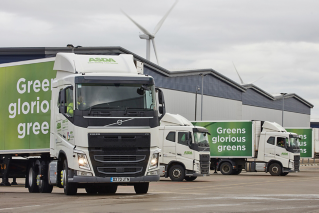 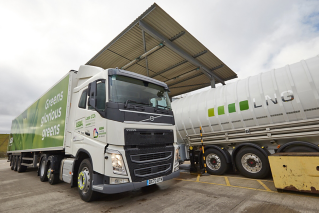