We noticed that you are using a browser that is no longer supported by our system, to enjoy the full Volvo experience consider changing browser
x
Choose another market or language to see your local offerings and find content in your language.
Continue Select market or language.
×

2021-06-24
Martin Tomlinson
Warton Freight Services has marked 30 years in the haulage industry by putting a new Volvo FH 8x2 rigid onto the road, equipped with a 70-tonne/metre Fassi crane.

The West Thurrock-based business has traditionally operated with vehicles from two rival manufacturers. However, it opted for Volvo for this flagship order after monitoring the performance of six seed Volvos integrated into its 58-strong fleet during the last two years.

Steve Barclay, Director at Warton Freight Services, says: “We’d heard good things about Volvo and we wanted to see how they would perform. I was invited for a visit to the Volvo factory in Sweden by our local dealer and I was really impressed with the design and quality of the product.

“This led us to take on two FH tractors, two FM 8x2 rigids and two FM 6x2 rigids and compare them closely to what we had been running previously. It was the real-world performance that put them in pole position for this latest order.

“For our 30th anniversary we wanted to do something a bit different and to have a big crane fitted onto a new eight wheeler. It was a big jump compared to what we had done in the past and I wanted to make sure that stability wise it was the right truck for the job – the FH came out on top.”

Expected to be in operation between five to six days a week and clock up roughly 50,000 km each year, the haulage firm will use the powerful FH to deliver a wide range of heavy loads to sites across the UK.

“The crane has the fly jib on there as well, so that allows us to get an assortment of loads onto the truck,” adds Barclay. “It might be moving steels, generators, cabins, anything.

“Its very first job was actually moving a fully built wooden house from Bishop’s Stortford to deep south Wales. It had to have an escort car running with it, as it was a very wide load, but the FH did the job perfectly.”

Warton Freight Services has had the new truck designed with a limited-edition wrap – to stand out from the rest of its fleet, in celebration of three decades of hard work in the industry.

Established in 1991, Warton Freight Services is a family-owned haulage and distribution business, providing a wide range of transport solutions for customers across the UK. 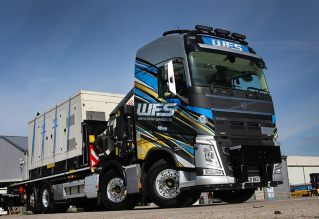 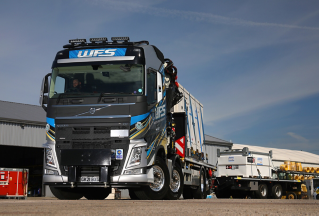 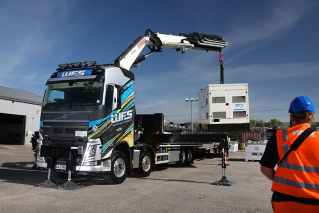